As the leading provider of GPS connectivity products and Software-as-a-Service (SaaS) solutions, we are committed to delivering the best telematics technology and customer service in the industry. Guidepoint Systems is a service-first company where our customers and business partners deserve our best work and our utmost respect and appreciation. Therefore, we strive each day to develop products and provide services that exceed their expectations and deliver value in their business and personal lives. Mr. Spencer earned a Bachelor of Science degree in Chemical Engineering from Northwestern University (Evanston, IL), and received his Six Sigma Green Belt certification. He later received his MBA from the University of Chicago’s Booth School of Business, specializing in Finance and Accounting.

The acquisition of Guidepoint Systems is yet another significant strategic business achievement, allowing him to control operations and growth strategies for a pioneer innovation firm in the mobile telematics and Software-as-a-Service industry. Mr. Spencer brings direct experience as he supported telematics coverage during his tenure at Morgan Stanley as well as his engagement with Guidepoint Systems, dating back to 2016. Understanding automotive accessories and their value to dealers and drivers is second nature to Scott.

He has more than four decades of experience in the automotive aftermarket, and more than five years in the OEM channel. He uses that experience to effectively communicate with customers and suppliers and help form successful relationships between those two groups.

Throughout his career, Scott has proven to be an extraordinary performer. He was instrumental in the 1990s in introducing the residual phenomenon for adding accessories to lease vehicles while actually lowering the price. He has also been recognized as a top distributor in his field multiple times. When he is not working, he enjoys giving back to his community. He has served as a volunteer driver for Meals on Wheels for 25 years.

Scott says, “one of the great satisfactions in my role with Guidepoint is when I work with a dealership to initiate a new program and then help them develop it into a successful part of their business model.” At Guidepoint Systems, Craig’s name is synonymous with customer service and satisfaction. He joined the company in 2012 and has more than 20 years of diversified GPS technologies experience. His work in this field started in the late 1990s, during his time in the U.S. military.

Craig has held many different positions at Guidepoint, from technical Service Manger to Vice President of Member Service (call center). He’s also been involved with technology innovation at the company, assisting with the launch of the 3G and 4G products. From support, service, training and renewals, Craig drives the strategy and execution of programs that benefit our customers and partners. In doing so, he brings safety and security to Guidepoint’s customers.

Craig says, “I get tremendous professional satisfaction from helping customers better understand the GPS technology and teaching them how to use it to solve a problem or concern.” Rob says, “Guidepoint is an innovator in the telematics industry and is in a unique position to serve OEMs, dealerships and drivers with vehicle-centric technology and solutions that go far beyond concierge services and tracking.”

He adds, “we solve our customer’s daily problems managing their fleets, from a single vehicle to thousands of vehicles, and in doing so we provide them peace of mind knowing that their vehicles and drivers are safe and secure.” Going the extra mile – for Ira Levin, it’s all in a day’s work. He sets out each day to exceed customer expectations.

Ira is an industry executive with more than 30 years of experience in the highly competitive automotive finance and insurance industry. He’s worked with third-party administrators, independent agencies, and agents facilitating GPS programs across the U.S. who are focused on profitability. He’s also previously headed up the U.S. sales force for an OEM service contract division.

He brings extensive expertise in B2B and B2C sales, strategic product development, and firsthand knowledge about the needs of the OEM and dealer markets. He has a keen sense of how Guidepoint Systems’ products and telematics can help them deliver high quality customer service and revenue-building strategies, for both the short and long term.

Ira joined Guidepoint in 2017, and his industry recognitions include being one of just 10 people recognized for the integration of Chrysler Financial with Mercedes Benz Financial, leading to the establishment of Diamler Chrysler Financial Services. Erin Price is THAT person at Guidepoint Systems – and every organization depends on a person like her.

She joined Guidepoint in 2008 and now serves as Director of Operations & Supply Chain. In that role she oversees every aspect of consumer product development. Erin’s commitment to customers is relentless. While she is focused on supporting OEM programs, she also handles planning and production schedules, supply chain management, and the integration of hardware and software for Guidepoint’s customers. Erin takes on the responsibility of participating in the production process as much as possible to help solve issues faster, providing a superior experience to customers.

In 2019, Erin’s dedication to the company and its customers was honored when she received the rare recognition of being Guidepoint’s Employee of the Decade from 2010-2019.

She proudly says, “Daily operations is my specialty.” You could say that Bryan Reynolds knows the Guidepoint Systems product and service line “from the outside in.”

Before joining Guidepoint in 2015, Bryan worked in automotive dealerships for 30 years. He was recognized by Chrysler as being one of the Top 20 Service Managers in the nation and was a Master Certified Service and Parts Manager for 15 years. He also worked in sales and as a finance manager before bringing his experience and talents to Guidepoint. Now he uses his knowledge to help Guidepoint better understand dealership and customer needs and how the company’s telematics can impact their bottom line.

Bryan says, “customer service has always been paramount to me. I’m proud to know that the Guidepoint team is committed to providing our customers with exceptional and honest service.” Monirul is also passionate and a world class expert in the design, development & manufacturing of highly advanced & scalable LTE Wireless Modules (CAT M1/ 1, CAT 4/6; CAT 16) as well as their certification in US, EU and Asia markets and to develop scalable performance simple IoT grade device or high-performance automotive grade Telematics Control Unit with these modules as the heart of the device. His vision is accelerate and drive the 5G wireless technology adoption in vehicles. With more than 20 years of experience in management and accounting, Kristine Walker is dedicated to helping her clients reach their personal and professional goals. Kristine is a graduate of the University of Cincinnati, and has since been actively building her knowledge base and expertise to better serve those she works with.
Kristine understands how to build a successful business from the ground up, as well as assisting established organizations with their accounting and growth goals. In 1999, Kristine created a niche, interior design business, working with clients such as the Cleveland Clinic, Midwest Diagnostic Center, and more. She also spent 5 years as Operations Manager, followed by 7 years as General Manager at Elk Creek Vineyards; Kentucky’s largest winery.
Most recently, Kristine spent 6 years abroad living in Bali, Indonesia while her husband flew as a commercial pilot. During that time, she owned an accounting and business consultancy company. After moving back to the U.S., Kristine joined GBQ Partners. She currently serves as Accounting Services Manager overseeing the staff and Senior Accountants, along with handling accounting and advisory services for medium and large organizations across Ohio and Michigan. She is also the Fractional CFO of Guidepoint Systems, LLC.
Kristine has a strong passion for enhancing her clients’ business models, strengthening their understanding of finances, as well as helping them achieve their business aspirations. 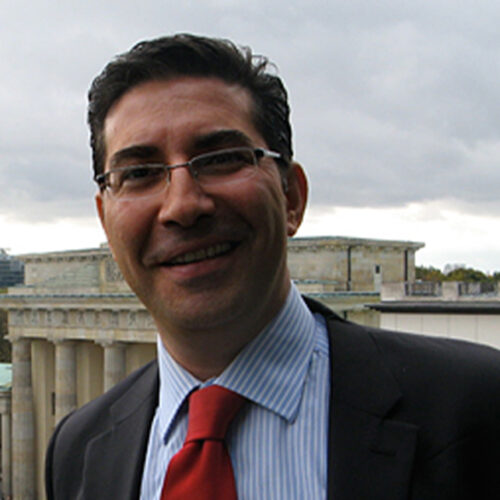 Amselem’s expertise in automotive electronics engineering dates back to the 1990s. His career includes serving with automotive and military equipment organizations in Europe and the U.S. He joined insurance giant, Allianz, in 2002 where he first deployed telematics solutions for leading OEMs such as Volvo, BMW and Mercedes. He later served as co-founder and CEO of Allianz Telematics the dedicated telematics carrier for Allianz until 2016. During that time he helped build and integrate telematics for Usage-Based Insurance (UBI) and Location-Based Services globally. Under Amselem’s leadership, Allianz Telematics had up to 500,000 connected vehicles in more than nine countries. Jacques also served on the Allianz Technology Italy Board of Directors from 2016-2021. He has been very active in the regulatory and standardization fields of connected and automated driving and was part of several working groups and initiatives such as the European eCall, Gear 2030 and C-ITS with key European institutions including the European Commission, Centre Europeen de Normalisation, Ertico ITS Europe and others.
“I’m thrilled to be part of the great team and innovative work now being performed at Guidepoint Systems,” said Amselem. “The company has long been a leader in telematics and has moved aggressively in the last two years under the enthusiastic leadership of Samuel Spencer to provide even more value to its customers. I look forward to working with Sam to build new solutions and quality products that leverage the data Guidepoint delivers so that OEMs and insurance providers can offer the best solutions to their customers.”
Amselem will be a strategic advisor for Guidepoint Systems in the areas of data monetization, data privacy (GDPR) and Usage Based Insurance.
“The first thing you notice with Jacques is his tremendous industry knowledge and passion for excellence,” said Samuel Spencer, President and CEO of Guidepoint Systems. “His addition to our strategic advisory team is yet another example of the great energy and innovation taking place at our company.”
Guidepoint Systems was founded in 1999 as an aftermarket supplier of GPS tracking and stolen vehicle recovery solutions. Today, the firm specializes in collecting vehicle, driver and environmental data that can be optimized by customers in a variety of applications including asset-management services for automotive dealerships, rental agencies, insurance companies, fleet managers, and OEMs looking to transform real time data into information that can generate revenue, optimize productivity and reduce financial and operational risk.
The firm has offices or warehouses in Detroit, MI, Toledo, OH, and Guadalajara, Mexico. Its 24/7/365 customer call center and outsourced fleet management service centers are based in Fort Worth, TX and Guadalajara, Mexico. Manufacturing and software engineering operations are based in the United States, Europe and Asia.